Travis and I had a shabby chic, rustic, yet elegant wedding in an old barn at Jefferson Patterson Park in St. Leonard, Maryland. I had so many ideas for our big day that I could hardly make the time for everything. I tell everyone that I wish we had started planning sooner, because I would have done twice as much as we did… and we did A LOT. Here’s one of the things we did to make our special day just a little more special… 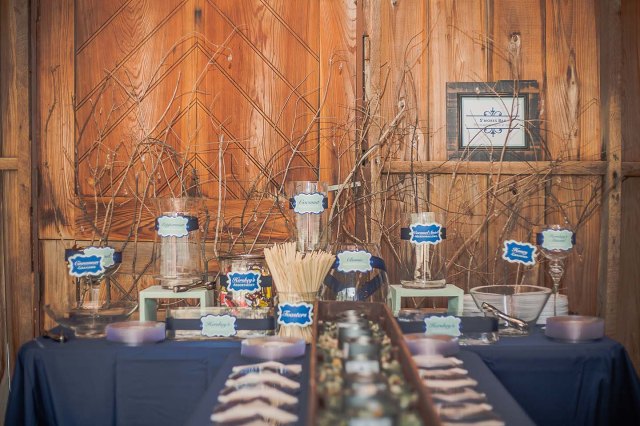 I knew we were going to have a cake, and favors that were cookies… but that didn’t stop us from having even more sweets at our wedding. S’mores seemed to fit the venue so perfectly and even though so many people told us it would be expensive to do, we did it anyway. And we didn’t break the bank in the process.

We built this awesome s’mores trough out of old pallets we found behind Lowes (they’ll actually let you have as many as you want!) We started by pulling all the nails out so we were left with just the wood. Then we reassembled it into the trough shape. Travis lightly sanded the wood and then we finished it up with a quick coat of stain. The rocks came from Ikea and the sternos and tongs came from PartyCity. We were lucky enough to be able to borrow all of the beautiful glass containers from a good friend of ours… thanks Julie!!! This in itself probably saved us around $200. 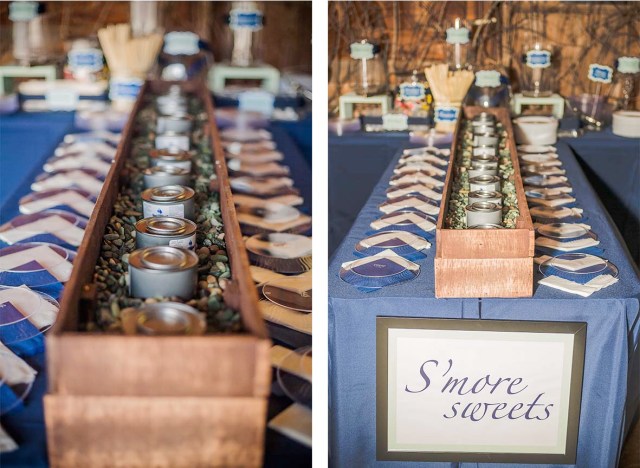 We bought gourmet marshmallows from Plush Puffs, which to be completely honest, I have no idea what they tasted like. We were being pulled in so many directions that night, I hardly even had one s’more. What a shame. But I heard they were good! To keep the cost down, we bought a good amount of the classic Kraft marshmallows. We had Ghirardelli caramel squares and assorted fun-size candy bars. So even if you weren’t a s’mores fan, you could still fill up on all the fixings. 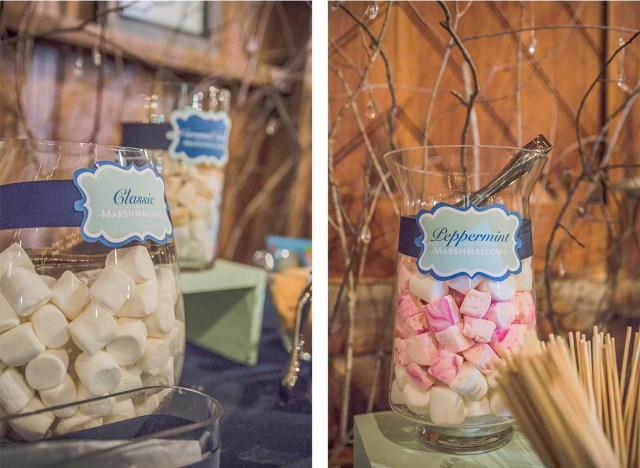 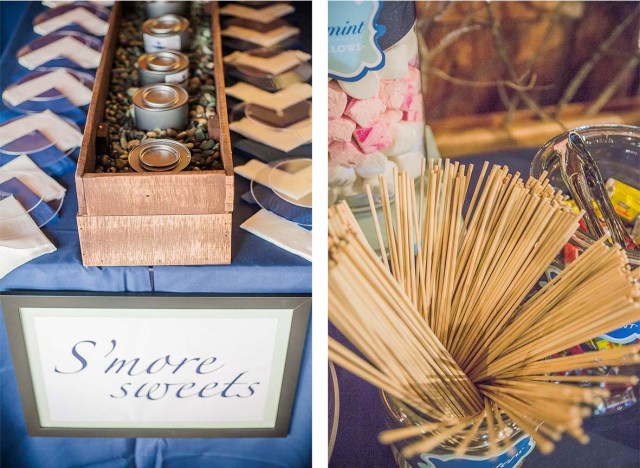 We toasted the marshmallows with shish kabob sticks that were ridiculously cheap from Walmart. I’d say they were under $4 for about 400 of them. If you’ve already read our About tab, then you know I’m a graphic designer, so that’s where the labels and signage came in (the picture frames came from Ikea!).

Wondering where that cool rustic stick backdrop came from? Yep, we made that too. And yes, I rummaged through the woods to find all of them and then we stapled them (sandwiching them) between two pieces of wood to make a stand. I wish we had better photos of it but these two were from my crumby old phone. We bought little crystals from Michael’s and hung them from the little twig branches to soften and class it up a bit.

The entire cost of the s’mores bar was about $200, maybe less. It was one of those things people still talk about and our guests had fun toasting and assembling them so it was worth every penny.

After typing all of this, I could really go for a s’more right about now.

Interested in knowing who did our AMAZING photos? Check out LuLuEdward Photography!

when & why to use that type

Researching Typography for the Creation of a New Typeface

Here for your News buzz

Training The Mind To Train The Body

DIY-er who loves to redesign, repurpose, and reorganize just about everything.

Top 10 of Anything and Everything - The Fun Top Ten Blog

For the Knit of It
The Coyote Thistle
Practically Functional